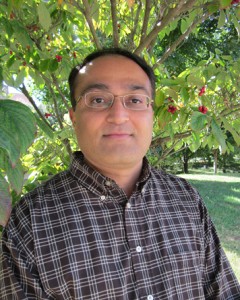 My laboratory is primarily interested in application of biochemical and biophysical approaches for elucidation of Structure/Dynamics-Function relationships in biomolecules. Owing to the diverse nature of biological problems investigated, we utilize techniques from wide-ranging areas in biology such as molecular biology, cell biology, protein biochemistry, structural and computational biology. We currently have two active areas of research:

Functional dynamics of cytochrome P450 enzymes.
Cytochrome P450 is a family of heme-containing enzymes in humans that plays an important in metabolism of greater than 90% of pharmaceutical drugs out in the market. Drugs that can act as inducers or inhibitors of these enzymes in the liver can disrupt their function leading to adverse drug reactions such as drug-drug interactions, drug toxicities and reduced pharmacological effects. Which drugs act as inducers, inhibitors or enzyme substrates for metabolism is largely controlled by specific interactions between the enzyme and the drug. Conformational dynamics of the enzyme and substrate often dictate the nature of these interactions and the mechanism of enzyme function. We are interested in elucidation of functional dynamics in several important human P450 enzymes that can help us understand why people metabolize drugs differently and why different people exhibit a variable spectrum of adverse drug effects. Results from such studies can immensely benefit pharmaceutical research, leading to better drug design and help prevent potentially lethal drug-drug interactions in wide-ranging diseases conditions (such as cancer, autoimmune diseases, cardiovascular diseases etc.) where these drugs are administered.

The inherent flexibility and dynamic nature of these enzymes allows them to bind substrates with diverse physicochemical properties and this property can be exploited in design of more efficient catalytic systems for commercially useful organic substrates as well as bioenergy applications. We are also interested in structural and dynamic characterization of several commercially relevant bacterial P450s to identify structural and molecular elements inherent to these proteins in terms of their specific ligand binding and chemical properties. This will be important in explaining the catalytic efficiency of this protein system towards certain organic substrates. We are currently developing novel structural and computational approaches for protein molecular design to achieve these goals.

Molecular basis of endotoxin recognition by receptors involved in the innate immune system.
Recognition of endotoxins released by microbial pathogens during infection of higher organisms leads to an appropriate innate immune response from the host cell. This response if uncontrolled, often leads to sepsis and septic shock, a major cause of mortality in hospitals. Onset of sepsis occurs in a series of signaling steps, initiated by binding of endotoxins to a key host cell receptor CD14 expressed on the surface of monocytes and tissue macrophages of the host. A precise understanding of the molecular mechanism underlying CD14-dependent endotoxin recognition and signaling is thus essential for the control of immune response and endotoxin septic shock. Efforts in our laboratory are currently focused on understanding the molecular basis of endotoxin recognition by CD14, mainly using site-directed mutagenesis, cell-based functional assays and structural techniques such as Fluorescence and NMR spectroscopy. This will provide insights into the mechanism of CD14-mediated response and will be quite useful in the design of effective antagonists and development of new strategies for prevention and therapeutic treatment of sepsis as well as infectious diseases.