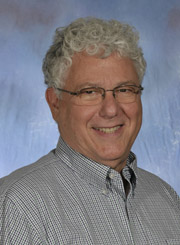 The research carried out in our laboratory involves microbial pathogenesis and molecular genetics emphasizing the molecular biology of membrane transport and multidrug resistance, the structure and function of peptide pheromones/hormones and their receptors, and the discovery of fungal virulence factors.

Structure and Function of Peptides and Peptide Hormone Receptors
We are studying the mating system of S. cerevisiae as a model system of peptide hormone/pheromone biology. Hormones play a vital role in the regulation of cellular activity. An understanding of the interaction between a hormone and its receptor is necessary for comprehending signal transduction/intercellular communication and for designing analogs useful in therapy of endocrinological disorders. We have synthesized and analyzed analogs of the mating pheromones, a-factor and -factor, by a variety of techniques combining both chemistry and molecular biology. Our studies indicate that a preferred conformation of these small peptides is necessary for full biological activity. Some of these new analogs represent the first S. cerevisiae pheromones with greater activity than the naturally-occurring peptide providing useful tools to study ligand-receptor interactions at the molecular level. We wish to fully describe the structure of the pheromone binding site within the receptor and to understand how the pheromone activates the signal transduction pathway by binding to this site. These experiments will be done by using both a battery of pheromone analogs we have synthesized by peptide chemistry and also receptor mutants we have generated by molecular biological techniques.

Molecular Biology of Fungal Pathogenesis
Fungi are increasingly important as opportunistic pathogens in humans immunocompromised by infection with HIV, by treatment with immunosuppressants as a result of organ transplantation, or by administration of anticancer drugs. We are interested in identifying the fungal genes encoding "virulence factors" which are those attributes that allow fungi to manifest their pathogenicity. The approach we are taking to identify such genes involves deleting genes in the fungal pathogen Candida albicans and then determining the pathogenicity of the mutated strain. We have identified a number of virulence genes in this manner. We plan to study how the genes we have identified allow C. albicans to be virulent. Identification of virulence genes allows delineation of targets towards which drugs can be developed by a rational approach. Proteins encoded by virulence genes are ideal targets for antifungal drugs because they are pathogen-specific.

Molecular Biology of Membrane Transport
We have cloned, sequenced and characterized peptide transport genes from the yeast Saccharomyces cerevisiae, the pathogenic fungus Candida albicans, and the plant Arabidopsis thaliana. Analysis of the peptide transport proteins encoded by these genes indicate that we have found two new families of eukaryotic membrane transport proteins. In addition, genes involved in the regulation of peptide transport have been discovered. One of these regulatory genes controls the transcription of the membrane-bound, di-/tripeptide transport protein, and it is involved in the ubiquitin-mediated proteolytic pathway as well. Another regulatory gene encodes a component of a novel amino acid-inducible regulon. As the rational design of drugs against intracellular targets must include knowledge concerning passage of these molecules across biological membranes, this research has particular significance to drug design and delivery. We plan to carry out experiments to ascertain the distribution, topology, and three-dimensional structure of the membrane transport proteins in order to uncover the mechanisms of peptide translocation across the cellular membrane and within the cell. The regulation of expression of peptide transport will be studied in more detail in order to uncover the relationships among cellular metabolism, environmental sensing, and peptide transport activity.