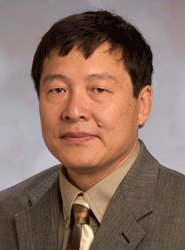 Dr. Guoxun Chen obtained his BS and MS degrees at Wuhan University, China, and his Ph.D degree at the University of Texas Southwestern Medical Center at Dallas. Dr. Chen joined the faculty of Nutrition Department at the University of Tennessee at Knoxville as an assistant professor in 2006 after finishing his postdoctoral training in the laboratory of Nobel Laureates, Drs. Michael Brown and Joseph Goldstein. He has conducted research projects related to obesity and diabetes since 1995. He has taught both undergraduate and graduate level courses since his arrival at UTK.

It is obvious that the number of fatty people in this society has increased dramatically. If this trend remains so, more and more obese people will eventually develop diseases associated with obesity, such as hypertension and diabetes. With the profound changes of life styles, dinning habits and food sources all around the world, the current rise of human obesity will raise social and public health issues not only in the United States but also in the rest of the world. Many factors including genetic and environmental ones have been attributed to the obesity trend. Dietary manipulation has always been considered as one of the ways to prevent us from the development of metabolic diseases, such as obesity and diabetes. However, the underlying mechanisms have yet to be revealed. Dietary composition certainly plays a role in the energy balance.

Normally, disturbed sugar and fat balances are observed in patients with metabolic diseases, such as obesity and diabetes. The research focus of Dr. Chen’s laboratory is to understand the molecular mechanisms causing the abnormalities. It derived from his original observation that insulin, an important hormone for regulation of blood sugar and fat levels, probably stimulates the synthesis of a lipophilic (lipid loving) molecule and in turn, increase fat synthesis in liver cells. When Dr. Chen started his laboratory in 2006, he decided to analyze the functions of these lipophilic molecules in rat livers as liver plays a critical role in maintaining sugar and fat balance in our body. Dr. Chen and his group found out that vitamin A, and its derivative are responsible for regulating activities of enzymes involved in sugar and fat metabolism in liver cells. As an essential micronutrient, vitamin A has traditionally been associated with night vision and embryonic development, etc. However, elevation of liver vitamin A contents in patients with type I diabetes was observed more than seventy years ago (1937). Dr. Chen’s work indicated that vitamin A plays a role in sugar and fat metabolism, and it deserves further investigation. Recently, Dr. Chen was awarded the Scientist Development Grant from American Heart Association National Center to support his research work on the roles of vitamin A in the regulation of sugar and fat metabolism in liver. Dr. Chen received the Young Investigator Award from the Counsel of Nutrition, Physical Activity and Metabolism in the American Heart Association Scientific Sessions at Orlando, Florida in November of 2009. His future research will focus on the roles of vitamin A in the development of metabolic diseases.